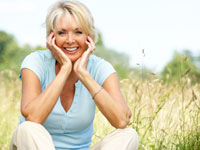 Menopause is a natural, physiological cycle that every woman goes through. Menopause means that the functionality of the ovaries is getting depleted – the functions of the reproductive organs are ending. All of the female reproductive organs and female sexual hormones are degenerating. Menopause technically is the period of stopping the menses or monthly cycles. It could occur at the ages between 40 and 60, the average age is around 50. The first symptoms are usually hot flashes, sweating and emotional changes. At the later stages of menopause occur itchiness, burning and dryness of the vagina, frequent urination and incontinence, as well as dry and itchy skin.

According to the Traditional Medicine theory, menopause is the damage of the kidney Yang and Chi, eventually causing kidney Yin deficiency and will interrupt functionality of other organs, such as the liver and heart. When the kidney Yang is deficient, the Chi and blood flow to circulate to the heart and liver would be reduced, causing both organs to be lacking in replenishment, diseases and symptoms then occurred. Kidney deficiency is the cause of the premenopausal syndrome. Either Yang or Yin deficiency, the treatment should always be based on kidney deficiency. If other organs are associated with the syndrome, then treat all together, but still the kidney is the major organ to be considered for ways of treatment.

Acupuncture and herbal medicine performed a great help to reduce symptoms by rejuvenating the endocrine systems to balance the hormone deficiency and lift the vast phases of menopausal syndrome.